One of the Balearic Islands

The Balearic Islands is one of the diverse places for tourists who want to travel to Spain. It is an archipelago of the western Mediterranean, near the east coast of Spain's the Iberian Peninsula. Ilis Baleares is the official name of the Catalan Balearics Islands. The Spanish language is known as Islas Balere This area is decorated with beautiful views of the sea and mountains. Balearic has many small and large islands and islets. There are four largest islands are Mallorca, Menorca, Ibiza, and Formentera. The Mediterranean climate prevails among the islands. These islands are popular for tourism. Many tourists come every year to party on Ibiza Island. To celebrate the holiday there are many attractions along with beautiful views and dance songs of the sea. 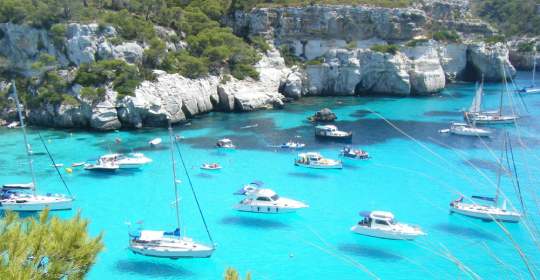 The foods of this archipelago are included in Spanish and Catalan cuisine. Balearic cafes and restaurants offer a wide variety of flavors foods for seafaring tourists. Fish and shellfish are a staple of most menus. Common foods, which are often Catalan such as soups, hearty stews, and spicy meats.

Caldereta de llagosta  (a lobster cooked with tomatoes) is a specialty, especially in Menorca, such as salted cod, grilled squid.

Pa amb Oli is also a delicious inexpensive food. It is a bread smeared with olive oil which is usually eaten for lunch or breakfast. . Another part of the Balearic culinary tradition is a spiral pastry called an enzyme held with icing sugar.

Both Catalan and Spanish are recognized as official languages in the Balearic Islands. However, the Catalan language is quite familiar. However, they can speak both languages well. Also speaks English, German, French and Italian. Especially those who work in the tourism industry.

There are many good quality hotels and restaurants. In the summer the Balearic Islands charge a substantial amount for hotel rooms. The cost of food can be expensive.

The islands are easy to access from parts of the Spanish mainland. Such ferries and catamarans connect the islands with Barcelona, Valencia, and Denia, and there are plenty of inter-island ferries. In general, these are expensive and can be booked perfectly in the summer.

Traveling to the islands by bus, moped, scooter, and bicycle is almost entirely possible. But car rental companies do not allow their vehicles to be transported from one island to another.

So the Balearic Islands may be your perfect destination for travel.

After the death of Ferdinand II of Aragon in 1449, their respective territories were ruled separately. The Bolivar Islands were frequently attacked by Ottoman and Barbary pirates from North Africa. Tormentors were even temporarily abandoned by their population.

The Bolivar Islands were frequently attacked by Ottoman and Barbary pirates from North Africa. Formentera was even temporarily abandoned by its population. Most recently, in 1521, Turkish private forces, led by Ottoman Admiral Hardin Barbarossa, invaded the Balearic Islands and the coast of the Spanish mainland.

In 1556, the Ottoman cursor was destroyed by Turgut Reis. As a result, many people were forced into slavery. The island of Menorca was a British dependent for most of the 18th century as a result of the Treaty of Abrecht. The treaty was signed by the Kingdom of Great Britain and the Kingdom of Portugal, as well as the Kingdom of Spain, to end the conflict caused by the war of the Spanish successors - Gibraltar and Menorca to the Kingdom of Great Britain, Sardinia to Austria and Sicily to the House of Sawai. Gave. As a result, the region has been part of the Crown of Aragon for more than four centuries. In June 1756, the island fell to French forces under Armand de Vigerot du Plessis and was occupied during the seven-year war.

The island was recaptured by the British after the war. But after the British withdrew their military forces by the American War of Independence, it fell into the hands of Franco-Spanish forces after a seven-month siege of 1781–82. . When Spain became an ally of France during the French Revolutionary War, it again came under French rule. After the last British occupation from 1798 to 1802, Menorca returned to Spain through the Treaty of Eminem during the French Revolutionary War.